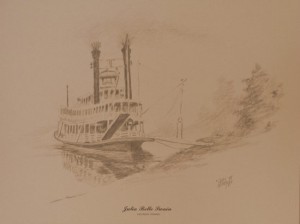 The “Julia Belle” glided gently through Hogtown Bayou and came avast at the docks of Cessna Landing. She had steamed in from Pensacola, as she often did, under the command of Captain John E. Rogers, making this brief stop before paddling to her terminus at Freeport. Indeed, the stop would be only momentary. In past years, when Cessna Landing was a thriving port of call with its cafes, saloons, and hotels, the boats were constantly offloading building supplies, groceries, and people. Now, there were only a few goods to deliver and even fewer travelers.

Yet, surprisingly, today’s manifest included a family of four with Cessna Landing as their final destination – the largest number in some time. Captain Rogers looked at the passenger list, as his first mate supervised the mooring of the ship, and then down at the luggage-bearing, trunk-toting family on the deck below.

“The Schellmans,” he said quietly to himself. They were elegantly dressed, obviously with some means. There were Andrew and Anna, the parents, with two children: Henry and Kate. Rogers noted that they had listed Pittsburgh as their place of residence, but there was no return trip yet booked. The captain had a fairly good idea why the Schellmans were at Cessna Landing, but like the travelers who had come the years before, it was too late to warn them…