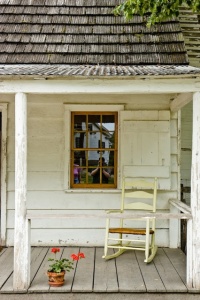 When my son was younger he decided he was leaving home. “I’m done with you! I’m moving out!” he shouted. I remembered something a sweet grandmother had once shared with me when one of her own children, many years ago, had made a similar threat.

Following her script I answered calmly, “Well, I hate to see you go, but I’ll give you a few minutes to pack.” After leaving him in his room, the boy began to feverishly stuff a duffle bag with a few clothes and his most prized possessions. When he appeared at the front door ready for his new, independent life, I looked in his bag.

“I bought those clothes you have there,” I said. “They are mine and stay here. So does your Xbox, the macaroni from the cupboard, even the bag you are carrying. It all belongs to me. And don’t even think about taking your bicycle. That’s mine too.”

You get the idea. For all his stubborn, childish rantings and ravings, what did the boy actually possess that he could take with him and begin somewhere else? Nothing. Where was he going to go at age 10 to start this magical life of independence and freedom? Nowhere. How was he going to provide for himself; feed himself; shelter himself? He couldn’t.

Without the benevolence of his father – and without a daily dependence upon that father’s care – he would end up naked, hungry, destitute, and poverty-stricken. And no amount of resisting, opposing, shouting, or posturing about how he was going to make it on his own would change that fact.

Jesus’ parable of the Prodigal Son is the archetypical such story. A boy demands his inheritance from his father and runs off to make his own way in the world. He didn’t need his father’s rules, boundaries, or charity – not now that he had the old man’s money – he was his own man.

As it was bound to happen, a deep recession hit and the boy lost everything. He ended up working on a hog farm, so hungry that he longed to eat at the trough with the pigs. Finally, the realty of his circumstances sank in and he said to himself, “My father has hired hands that live better than me,” so he went home.

Of course, the Prodigal returned with nothing, but missing along with his money was his pride; gone with his inheritance was the chip that he once carried on his shoulder; and just as empty as his wallet was his ego. Thus, he came home possessing much more than when he left. He came home after finding his true self: A child living in dependence upon the goodness of his father.

We are all stubborn and prone to resist and oppose God, opting for personal defiance over a life of reliance (even when our “self-made” accomplishments are actually blessings from God). Such contrariness hardly leads to a better life. It keeps us from enjoying the life God offers.

One thought on “Going Home”