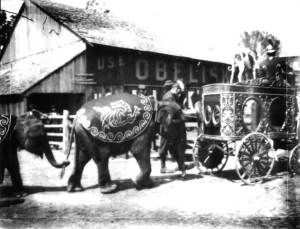 Albert “Jabot” Williams was born in the second decade of the twentieth century, “about two miles from the the Choctawhatchee River.” He indicates that he has never lived further than that from the river. As a youngster, he tended large numbers of hogs that roamed the Choctawhatchee floodplain. He also briefly tried making moonshine, and as was locally famous for being one of the fastest runners afoot.

I remember that old man Warren Commander lived on the river bridge. It was an old, wooden bridge – a drawbridge. Mr. Commander and his wife lived in a house attached to that bridge. He tended it and watched the river. I don’t think there was ever a boat big enough come through that he had to turn it. A lot of people had little farms. That was before the paper mill came in. People have changed. Back when I was a boy, people were more neighborly. If somebody was sick, they’d walk four or five miles to sit up with them. They don’t do that any more.

Another memory is when the “Old Hag Show” came through – there were about 15 wagons. I went to see their elephants cross the river. There were two big elephants. One was named Mary, the other one was Jim. The Old Spanish Trail went down to the river to the ferry. But the elephants didn’t cross it. They couldn’t be put on it, and the wagons bogged down, anyway. So they walked them across. The water came over the top of them, and they would stick their old snouts up as high as they could get them. They set up their show in Caryville, DeFuniak, Bonifay, Pensacola, and bigger places. They they started shipping them on trains.

There’s a shortage of moonshine now, but it used to be the biggest money crop in this county. But I only made moonshine for a little while, because I drank up my profit. One time I made five gallons of good, strong whiskey. I’d say it was 100 proof. I sold three pints on a Monday morning and went to drinking what I had left until the next Monday. I stayed drunk for a week and just about dead for another – it liked to have killed me…

To read more, get “Down By The Riverside,” by Ronnie McBrayer here.