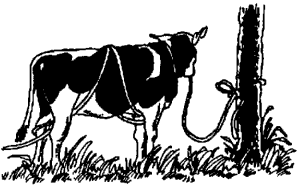 A farmhand went out every morning to lead his cows from the barn to the fields. Every evening he would gather them back into the barn. One evening, as he tied the cows up for the night, the boy found that one of them was missing her rope. It was too late to go buy a new one, too dark to find the missing one, and he was afraid she would run away during the night.

The farmhand went to the old cowboy in the bunk house for advice. The cowboy said, “That’s easy, son. Pretend to tie her up, and make sure she sees you doin’ it. She’ll think it’s business as usual.” The young man did as was suggested. The next morning he discovered the cow had remained at the hitching post all night.

He untied the other cows, as usual, and led them outside. He noticed that the cow with the missing rope was still in the barn, standing in the same spot where she had been all night. Not budging, the farmhand was again confounded. He returned to the wise, old cowboy who said, “Look, that cow is a creature of habit and thinks she’s still tied up. Go back, pretend to untie her, and let her see you do it.” He did as he was told, and the cow left the barn with the others.

This story reveals much more about human nature than the temperament of herd animals. We all tend to fall back into old patterns, individually and corporately, even when the reins that once held us to our routines have been removed. As creatures of habit ourselves, we struggle to change our behavior, allowing past experience to dictate our future actions.

Yet, the more pertinent challenge is not a change of behavior. It is changing the thinking and ruminating that traps us. When we conclude, internally, that we are caught, bound, powerless, unchangeable, or otherwise fixed in an inescapable pattern, then that pattern can never – never – change. Inner change of heart and mind must proceede any change of behavior.

The Pauline advisement in the New Testament is clear on this count. He writes: “Don’t be conformed to the behavior and customs of your surroundings, but be transformed by the renewing of your mind – by changing the way you think.” This is a worthy and revolutionary ambition to say the least. But how does one actually change the way he or she thinks?

The ancient word employed by Paul for “renew” is a rare one. It does not mean “new” in the sense of the latest product rolling off the assembly line. It means “new” like a renovation project. The old has to be torn out, replaced, updated, and refurbished. The “old must go and the new must come.”

So internal change, renewed thinking, is the result of Divine demolition and reconstruction – what the Recovery Community calls “a spiritual awakening.” That is our only chance for change, and it’s a chance worth taking.

One thought on “A Chance for Change”