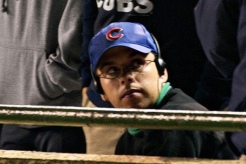 Now that the Los Angeles Dodgers and Houston Astros have concluded one of baseball’s most exciting World Series (thanks for the sleep deprivation, gentlemen), the sports nation now leaves the boys of summer behind. But before moving on, it’s worth noting that the winners are champions after a decades-long wait. At least they didn’t have to wait as long as the Chicago Cubs.

Much chronicled and loudly celebrated, last year the Cubs won baseball’s highest prize for the first time since 1908, the longest championship drought in all of North American sports (yes, Cleveland Indians and Detroit Lions, hope springs eternal). Equally reported upon was how close this team came to getting to the World Series in 2003, and the accompanying “Steve Bartman incident.”

Just a handful of outs away from advancing to the World Series, the Chicago Cubs were up 3-0 on the Miami Marlins. On a foul ball, Steve Bartman reached into the field of play interfering with fielder Moises Alou’s attempt to make a catch. The ball fell into the seats, and the Cubs fell apart. The Marlins came back to win and the Cubs were ultimately eliminated.

And Steve Bartman – a social, happy, fun-loving, Cubs-cheering financial adviser – became the most hated man in the state of Illinois. Forget the epic collapse of the team so close to winning it all. The fan base blamed Steve Bartman for the loss; some blamed him for everything. He quite literally went into hiding.

But after more than a decade of enduring threats, stalkings, and a constant barrage of media inquiries, this past summer Bartman reemerged at the request of the Cubs. They presented him with a World Series ring, saying, “We hope this provides closure on an unfortunate chapter of the story that has perpetuated throughout our quest to win a long-awaited World Series…We felt it was important Steve knows he has been and continues to be fully embraced by this organization.”

Bartman, who had never made a public statement about the sordid episode, broke his silence: “I am hopeful this gesture will be the start of an important healing and reconciliation process for all involved…and is an important reminder for how we should treat each other in today’s society.”

A happy ending? Not for everybody. Some saw it as a weaselly PR move. Others continue to hold a grudge or think it a waste of time. But I, for one, am glad for Steve Bartman and the Cubs. We should never pass on an opportunity for healing, criticize an act of good will, or undermine decency and magnanimity.

My favorite benediction comes from the late Henri Frederic Amiel who wrote, “Life is short, and we do not have much time to gladden the hearts of those who make the journey with us. So, be swift to love, and make haste to be kind.” So, hurry up. Living a life of simple kindness can go a long way in healing our world.

Ronnie McBrayer is a syndicated columnist, blogger, pastor, and author of multiple books. Visit his website at www.ronniemcbrayer.org.

One thought on ““Make Haste to be Kind””