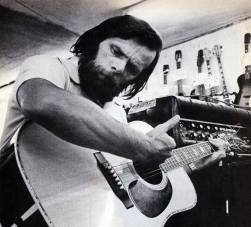 Donald Eugene Lytle would have been 80 years old this month, but had lived too hard for too long to die as an old man. Addictions, bankruptcies, tangles with the IRS, a two-year prison sentence: Lylte burned out instead of faded away. The world knows him by his stage name – Johnny Paycheck – one of country music’s most legendary outlaws.

Of his biggest hits is an autobiographical tune that comes to my mind every Mother’s Day weekend. It’s entitled, “I’m the Only Hell My Mama Ever Raised, ” a classic honky tonk number about a hard-working mom who loves Jesus and singing “Rock of Ages.” She does her best to keep her son on the narrow road, but try as she might, he turns to the devil’s ways and the boy’s life becomes a lamentable disaster.

As a parent, though, I wouldn’t mind rearing kids who turned out to be somewhat rebellious. I don’t want them living a life of crime, and certainly I prefer not to hang their mug shots on my refrigerator door; but neither I nor their mother want our children to lead boring, mundane, ordinary lives.

We hope they will do more than stick with the herd; that they will refuse to be pacified, numb managers of existing conditions. We don’t want them to just “go along to get along,” because this world needs people with true courage more than it needs corporate cogs. It needs individuals who will not shill for the status quo, but who will find the bravery to be risk-takers, trouble-makers, and hell-raisers.

Human beings, as we usually exist in this world, rarely live up to our Creator’s intention. We have been tamed, domesticated, and housebroken; taught to be well-behaved, well-heeled, well-mannered and well-managed citizens, instead of glowing, burning, firebrands ready to bring warmth and light to the world.

Audacious parents succeed in a two-fold, paradoxical task: They protect their children from the dangers of the world, and when the time is right, they push their children out into the very perils that were once held at a distance. These parents, with weeping and gnashing of teeth, will have instilled an inner strength that grounds the child, providing clarity and hopefully the nerve to do some righteous rabble rousing when the conditions dictate.

Dietrich Bonhoeffer, writing from the confines of a Nazi prison, counseled his young students, saying: “Learn to abandon the pursuit of position. Make a break with the cult of stardom. Be open and upward, connecting with true friends. Find satisfaction in your private life, and discover the courage to live.”

That is the challenge of parenthood: To produce more than another generation of humans, but people who are courageously alive. So mom, don’t worry if your kids kick up some dust along the way. I’ve never met or read about a saint yet without an arrest record. Those who will raise a little holy hell are the very ones we need.

One thought on “Time For Mom To Raise Some Hell”