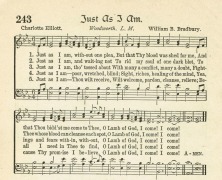 It was Dr. Bill Leonard who best described my religious upbringing. Speaking for many who came to Christianity in the fire-and-brimstone of Appalachian fundamentalism, he said, “Some of us were saved hard, sweating like we had been to hell that morning, and came back to the revival to tell about it that night!”

The typical revival service – the pews jam-packed with sweaty sinners – would begin with rousing, enthusiastic music. There would be testimonies, and the obligatory offering would be taken. Some individual, duet, or trio would perform a “special” – a special song – intended to perfectly set up the night’s sermon, the main event.

The preacher would then sermonize like a raving loon for the next 45 to 132 minutes, telling us how “hell is hot, heaven sweet, judgment sure, but Jesus saves!” His evangelistic sermon complete, then it would be time to call the transgressors to the altar – the mourning bench – for their public repentance and profession of faith.

Oh, it was a mighty war of attrition, with the angels and evangelist pleading and the Devil and we sinners resisting (This is where getting “saved hard” earned its moniker). These altar calls could go longer than the sermon itself. This was especially true if the pleading was coupled with about 400 stanzas of an emotional, heart-rending “Hymn of Invitation.”

If I rightly recall, “The Baptist Hymnal” contains over 600 individual songs, but for the “Hymn of Invitation,” only two or three were ever used. The most powerful – and most employed – was the classic, “Just As I Am” (If I had a dollar for every verse I ever heard of it, there would never be cause for a church collection again).

When I was young, the “Hymn of Invitation” was nothing short of emotional waterboarding; the constant shaming wrecked me, revival after histrionic revival. As I got older, but not yet old enough to get out of going to the meetings, I would sometimes “go forward” if the invitation was taking a long time, just to set the whole circus down. I figured, that if someone would answer the call, then we could all get home at a decent hour.

While much of what I’ve said here is tongue-in-cheek, I’m quite sincere about the dangers of such heavy-handed tactics. And while I remain in love with the old, revival hymns and still cherish most of those well-intended evangelists who were doing their best to “raise us right,” I have little confidence in the fruit of any faith that must be forced.

Related to faith and conversation, Thomas Merton inquired, “How does an apple ripen?” And he answered: “It sits in the sun.” His point? Like the birth of child or the maturation of a farmer’s field, only time can produce the intended results. No amount of manipulating, cajoling, or threatening can convert anyone or anything. “Keep still,” Merton said, “and let God do some work,” for God’s work is the work of grace.