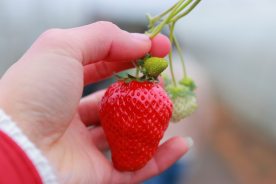 Dr. Robert Emmons is a professor of psychology at the University of California, Davis, who specializes in the “science of gratitude.” Yes, the science of it, as he and his colleagues have discovered quantifiable, measurable proof that gratitude is good for you.

According to he and his partners’ findings, thankfulness can lower blood pressure, boost immunity, reduce anxiety, and increase resiliency. Further, grateful people are those most likely to exercise, least likely to abuse drugs or alcohol, and are generally healthier and happier with their lives.

Researchers are convinced that this is more than the “power of positive thinking.” Gratitude roots people in the present moment of their lives. They learn to appreciate today, the “now,” and have chosen to focus on what they already have – at this moment – instead of focusing on the things they’ve been deprived of, or what they still want or can’t get.

Dr. Emmons prescribes a daily regiment of thoughtful thanksgiving. For he sake of your health, recognize and appreciate the gifts, graces, benefits, and people that you have in your life. He says, “This is how gratitude blocks toxic emotions such as envy, resentment, and regret, which can destroy one’s happiness. It is impossible for a person to feel envious and grateful at the same time.”

Accordingly, there is a masterful Zen story – often repeated by the late Brennan Manning – about a monk who was being chased by a tiger. The ferocious animal pursued the monk to the edge of a steep cliff where it appeared he had no escape. It was then, miraculously, the monk spotted a rope dangling over the edge.

So, there he was. Hundreds of feet in the air, he couldn’t go up, where the tiger would devour him, and he couldn’t go down, as there was not enough rope for him to reach the canyon floor below. All the while, tiny teeth nibbled away at his lifeline.

It was at that moment that a beautiful, red, ripe strawberry caught the monk’s attention. It was there, within arm’s reach, growing out of the face of the cliff. The monk picked it, ate it, and exclaimed, “That is the best strawberry I have tasted in my entire life!”

Manning offers the moral to the story: “If the monk had been preoccupied with the rocks below or the tiger above, he would have missed the present moment.” And concluding with a prescription for happiness that is just what the doctor ordered, he writes: “Life is best lived when you don’t focus on the tigers of the past or the jagged rocks of the future, but on the strawberries that come in the here and now.”

2 thoughts on “Just What the Doctor Ordered”