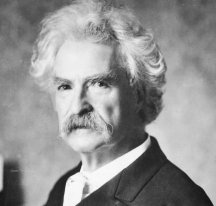 Some of the best advice I received about writing came from a venerable source. It was a quote from Samuel Clemens, better known as Mark Twain: “Substitute ‘damn’ every time you’re inclined to write ‘very,’ Your editor will delete it and the writing will be just as it should be.”

I haven’t always followed that advice, but when “very” finds its way into one of my columns or manuscripts – as inevitably it will – I immediately remember Twain’s recommendation and commence to editing my adjectives. Another one of his quips (and they are legion, of course) has been on my mind of late. It is about the Christian church.

Even the casual reader of Twain knows that religion was a favorite subject of his; and not because he was faithful in the pew every Sunday. He was a fierce critic, excoriating the church with his wit and wisdom. To that quote: “The church is always trying to get other people to reform,” said the master of satire. “It might not be a bad idea to reform itself a little.”

The founder of Christianity, Jesus himself, was exceedingly critical of the religion of his own day, was forever tangling with the keepers of orthodoxy, and at least once brought the entire socio-religious complex to a grinding halt. “The Cleansing of the Temple,” as it is benignly called, was Jesus’ direct condemnation of a vulgarly coercive system that abused its vulnerable adherents.

The abuse came in various expressions. There was economic exploitation of the poor; corrupt guardianship of the status quo to consolidate and maintain power; and there was relentless gate-keeping. That is, a few sanctioned priests were casting judgment on who could or could not commune with God.

Twenty centuries later and little has changed. The most susceptible are preyed upon by those who should be trustworthy. The status quo is protected by the complicit powers that be. Money appears to be more important than grace. A vigorous system of barriers is maintained to keep others out.

Quoting Twain again, he said, “If Christ were here now, there is one thing he would not be – a Christian.” That might be so, not because Jesus would reject faith, but because the institution would reject him. Jesus pushed the doors of faith wide open to all who would come, and today as then, that might prove to be too much.

He took sides with the exploited and openly condemned the sins of the hierarchy. This might have him pigeonholed as a radical or an extremist. He sought to “keep God free for people, and to keep people free for God,” to employ Richard Rohr’s brilliant phrase, and the gatekeepers would likely find such openness to be dangerous.

I don’t know if Jesus would be a Christian today, but I know Mark Twain’s earlier observation is completely accurate: The church needs to reform itself, and become a movement that more closely reflects its founder. That would be a very good place to start.

2 thoughts on “Reform Begins Within”