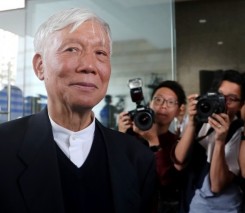 Last month, the Reverend Chu Yiu-ming, at age 75, made an appearance in a Hong Kong court room to defend himself against the charge of being “a nuisance to the public,” along with a number of additional subversive accusations.

Reverend Chu, a Baptist minister, is a leader of Taiwan’s “Umbrella Movement.” It was – and remains – a peaceful campaign to stop the growing authoritarian leadership of Taiwan’s government. When police and military units turned teargas and pepper spray on pro-democracy demonstrators in 2014, the protestors hid behind umbrellas to shield their eyes and faces from the chemicals. Thus, the movement had a name, and in Yiu-ming, a moral champion.

Chu escaped mainland China and Chairman Mao’s atrocities as an orphaned child. Ultimately turning to faith and religious service, for decades he ministered in some of Hong Kong’s poorest neighborhoods; sheltered survivors of the Tiananmen Square massacre; and routinely smuggled Chinese dissidents to safety.

When the Umbrella Movement erupted, Chu tried to sit it out. He was old, his health was fragile, and his friends and family reinforced the opinion that he had “done enough.” But as young students began protesting totalitarianism, he knew he had to protect them – and following the pattern of Martin Luther King, Jr. – try to keep the protest peaceful.

He describes his efforts, saying: “We strive for freedom, equality, and universal love. Our way is to peacefully expose injustice, making it impossible for evil to hide. We strive to inspire self-sacrificing love not to incite anger and hatred.”

On the day he was found guilty in court, Chu preached a remarkable sermon from behind the smudged glass of a holding cell: “Today, old and gray, I find myself making a final plea as a convict. And yet, at this very moment, my heart tells me that I have found the most honorable pulpit of my ministerial career.

“I hope that consciences will wake up, and together we will work to save the day. And should I still manage to find some strength in my aging body, I shall continue to toll the bell in the church, in the world, and in each human heart, because, ‘God has made clear what is good and what is desired: Do what is right, love mercy, and walk humbly with your God.’

“So I, Chu Yiu-ming now declare: We have no regrets. We hold no grudges. No anger. No grievances. But we do not give up. To the Lord, I entrust my life.” When he finished speaking the courtroom erupted with applause and the unfurling of scores of umbrellas.

What will become of Yiu-ming, his partners in freedom, and the generation of young Taiwanese who want nothing more than a voice in their own future? It is impossible to say, yet as spoken by Chu’s inspiration: “The arc of the moral universe is long, but it bends toward justice.” That justice comes to those who do what is right – and who do not give up.

One thought on “We Do Not Give Up”