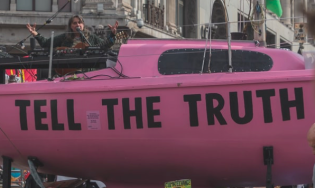 “You shall know the truth, and the truth shall make you free.” These words of Jesus were quoted repeatedly in the churches of my childhood and youth. Truth, I was told, was the essential commodity of life, and without it one could only wander about in the chains of ignorance and eventual damnation. But the worldview of faith that I inherited was not being completely honest about all this.

When my high school biology teacher challenged my biblical literalism with authenticated science, my alarmed spiritual leaders instructed me to close my mind to the truth and stick with a creationism that was simply untenable. When my lived experience opened up marvelous, verifiable worlds that far exceeded the sectarian, restricted, suspicious fundamentalism I had known, I was told I was “backsliding” and should return to the gospel.

Later, when I spoke to my ministerial peers and congregations about how Christians were far more eager to fight cultural wars and embrace naked nationalism than they were to remain faithful to the sacrificial, restorative, love-oriented way of Jesus, I was called hopelessly naive, tagged a “social justice warrior,” and labeled as “dangerous to the church.”

And in those moments of quiet but intense confrontation, when I have asked members of my own family, close friends, former mentors, and some of the people most responsible for my spiritual formation how they could trade their integrity, compassion, and commitment to the truth for a morsel of corrupt political power? Those have turned into some of the most painful conversations of my life.

Consequently, it is no surprise that a large chunk of Evangelical Christianity has proven to be so susceptible to the most wacky conspiracy theories. It’s no shock that this same demographic, by a large percentage, considers the unabated Coronavirus pandemic to be a hoax. And it is why the religious group that has most shaped me, has so eagerly sold its spiritual birthright for a bowl of beans (Apologies for the Old Testament reference). Squarely, we are not interested in the truth. We only want what will reinforce our already entrenched assumptions and opinions.

After all, my tradition has been rejecting science for centuries – or at least since the Scopes Monkey Trial of 1925. We are completely open to superstition, myth, and fanciful thinking – as our faith remains medieval in so many ways. We are forever rejecting anything that does not fit our narrow orthodoxy, and we have been preconditioned to follow any partisan, person, or protagonist who will shield us from the changing realities of the world.

President James Garfield allegedly quipped: “The truth will set you free, but first it will make you miserable.” That is exactly where we are, and until a large number of the faithful are willing to take a “searching and fearless moral inventory,” and then endure the necessary pain of “confession, surrender, and the making of amends” – to use Twelve-Step language – we will neither be truly free, nor have the credibility to be heard.