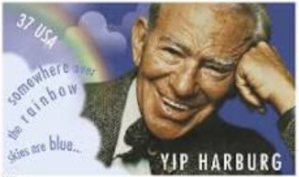 Isidore Hochberg was born in New York City’s Lower East Side, 125 years ago this week. His parents, Yiddish-speaking Jewish immigrants, had risked everything to escape the anti-Semitic persecution of Russia, and while the Lower East Side was far safer than the Czars, it was a hardscrabble place to grow up.

Little Isidore, the last of ten children, would be one of only four in his family to survive the next decade. He went on to complete high school, serve during the First World War, and graduate from college. Isidore promptly opened his own business, only to be met by the Wall Street crash of 1929.

Not unlike his parents before him – with nothing left to lose and nowhere else to go – Hochberg turned to his true passion: Poetry and song. He had a few pieces published, but times and prejudices being what they were, Isidore found his very name to be a barrier. So, he changed it. Isidore Hochberg became Yip Harburg, and it wasn’t long until Hollywood came calling.

MGM Studios needed someone to write song lyrics for a fanciful new film, someone talented for sure, but someone willing to take a risk, as both the medium and the movie were unproven. Yip, full of holy chutzpah, was a perfect match. Harburg would write every single song for the first movie to ever use technicolor: “The Wonderful Wizard of Oz.”

One of Yip Harburg’s creations, an Oscar-winning song that will last as long as the English language, was sung by Judy Garland who played Dorothy. Auntie Em, in an early seminal scene, says to Dorothy, “Go find yourself a place where you won’t get into any trouble!”

Dorothy ruminates a moment, looks at her little dog, and asks: “Some place where there isn’t any trouble? Do you suppose there is such a place, Toto?” Then, standing against the sepia-toned Kansas farmland, an Episcopalian from Minnesota belted out the words of a Jewish immigrant from New York: “Somewhere over the rainbow…”

Yip Harburg would go on to make many more movies, become a rowdy social activist for a plethora of causes, face off against Joe McCarthy, win tons of awards, and pay back every lost penny from the crash of 1929: But “Somewhere Over the Rainbow” will remain his greatest feat.

When Yip died, “The Washington Post” called him, “An idealist who wanted to write the world as he wanted it to be.” I think he would have been happy with that eulogization. At one of his last performances he said, “In our songs we work for a better world – a rainbow world. In times of confusion, times like these, when the world is a hopeless jumble, heaven can still open.”

No, Auntie Em. No, Dorothy. There are no places where there isn’t any trouble, but there will always be troubadours and visionaries who will never cease from singing and dreaming a better world into being – and who will challenge us to do the same.

One thought on ““Somewhere Over the Rainbow…””